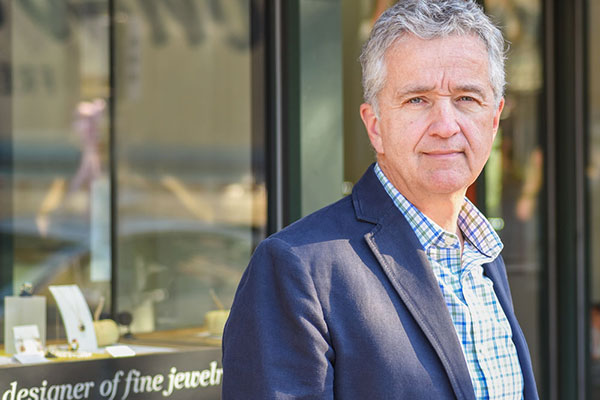 Dennis deJonghe is a jewelry designer who discovered his love for metal while earning his Master of Arts degree at the State University of New York College at Buffalo. After taking other art courses, Dennis recalls, “I took a jewelry course and fell in love with the entire process. Metal work offered a three-dimensional form and I began to view jewelry as miniature sculpture.” Upon completion of his degree in 1975, Dennis began his profession as a goldsmith. He worked as a jewelry designer in Rochester, NY, and then for a short time in the Virgin Islands.

Dennis continued to exhibit his jewelry and earned acclaim in juried craft shows and galleries throughout the country. After a few shows in Saratoga Springs, he decided its artistic and historic community would be the perfect home for his gallery and studio. He and his wife Peggy officially opened deJonghe Original Jewelry on Caroline Street in the summer of 1982 where the business began to grow. After 6 years of building a loyal customer base they moved the studio to a prime location on Broadway. Now, after more than 30 years in Upstate New York, Dennis has gained national acclaim. Among other awards, his handmade jewelry has been selected at the Manufacturing Jewelers and Suppliers of America (MJSA), American Gem Trade Association (AGTA) juried competitions. His pieces are also featured in jewelry fashion magazines such as National Jeweler.

“Oscar Wilde’s quote, “One should be a work of art or wear a work of art” expresses how I feel about jewelry – jewelry reflects the artistic tastes of the wearer. So I approach my designs as miniature sculptures, to be viewed from all sides and to enhance the body. This style has taken shape as soft curving lines that incorporate elements of balance, form and color into each piece. I regard the quality of the craftsmanship and materials as equal to the integrity of design.”

Schedule an Appointment with Dennis

Evan is focused on innovative designs that mix old techniques with new technology. Growing up around his father, renowned jewelry designer Dennis deJonghe, Evan gained insight into the artistic world of handmade jewelry. Always looking over his father’s shoulder, admiring the design aesthetics and wax carving techniques, Evan began dreaming up his own unique designs, hoping one day to create his own jewelry.

After working in his father’s studio during high school, Evan went on to earn a business degree from McGill University in Montreal, Canada. Majoring in marketing, Evan used his creativity to excel by developing his own identity and brand as a jewelry designer. Constantly sketching and thinking of jewelry, he knew he needed to pursue his love of the art.

In 2012, Evan enrolled in the Gemological Institute of America to complete the Applied Jewelry Arts (AJA) program and Graduate Gemologist (GG) degree. Honing in on his design skills and manufacturing talents, Evan used this new education to further develop his jewelry designs.

Evan gained national attention in 2014 when he won the 2014 MJSA Vision Award for his one of a kind Boulder Opal Pendant. Evan’s pendant was featured in the MJSA Journal and was later published in the local paper, The Saratogian.

“My designs are influenced by past experiences, relationships, and observations. Using these events as inspiration, I can begin to shape designs into jewelry that can be worn with love. My fascination of gemstones only adds to the enjoyment of creating fine jewelry, and I like to challenge myself to find a pleasing balance of shape and color. With precious metals and quality craftsmanship, my designs are transformed into beautiful jewelry.”

Growing up in Saratoga Springs, Evan has always been invested in the local community. These strong ties, and his interest in furthering the local arts, encouraged him to join the board of the Universal Preservation Hall (UPH) in 2016. His involvement will help preserve the property for performing arts, cultural, educational and community events.

Schedule an Appointment with Evan